The financial feasibility of investing in energy efficient lighting is clearly demonstrated by two clients where we have completed multiple lighting upgrades over the last 3 years.

The first (PropCo 1), where we have completed 15 projects in the last 2 years, currently achieves monthly energy savings of approximately 513,000 kWh. In effect, the capital expenditure for the first 4 projects (totalling some R6.5 million) has already been fully recovered. Capital expenditure for the next 4 projects (totaling some R6.1 million) will be fully recovered within the next 12 months. Energy efficiency projects for this client are now effectively self-funding thereby creating a virtuous circle where energy projects which reduce the cost base are funded by these savings thereby increasing the total cost savings available to fund further projects. 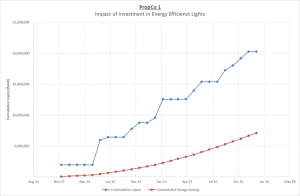 We have completed 9 projects over almost 3 years at another client (PropCo 2). The monthly energy savings achieved by this client total approximately 328,000 kWh. These savings have been used to fund projects which are not focused on energy savings but rather on a substantial upgrade of the lighting thereby improving the security and experience for staff, clients and consumers. The capital invested in lighting over the last three years has now virtually all be recovered and the benefits of the lower cost base will be enjoyed going forward. 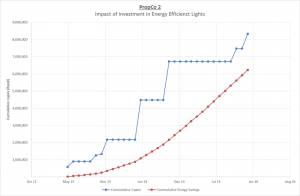 In the graphs below, you can clearly see the energy savings of the completed LED installations Green Power did for the common areas of the respective shopping malls.

Project completed in May 2014 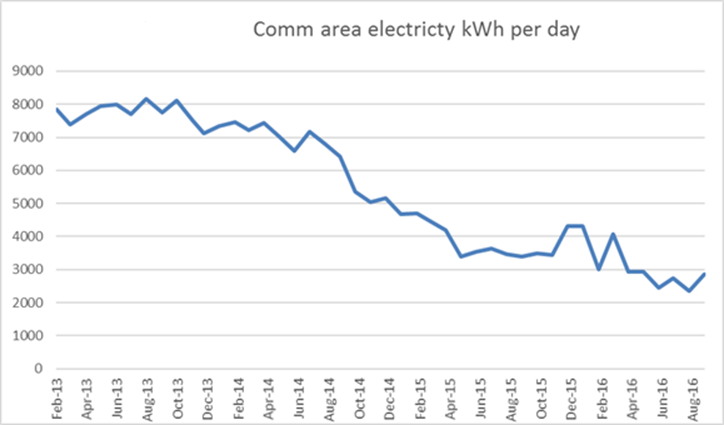 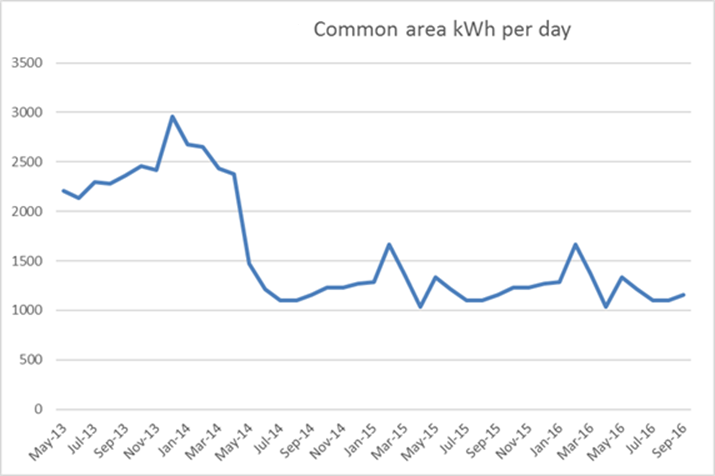 Project started in May 2016

“Colonial Park Plaza, at the time a 500,000 square-foot, 72-store mall in Harrisburg, Pennsylvania installed a new lighting system that provided more light and efficiency giving what shoppers characterized as new “sparkle” to the center’s promenade area, as well as depth and brilliance to surface colors. As a result, the mall’s appearance brightened, and more people started shopping there. In fact, over a 2-year period, traffic counts increased by one-third after the lighting program was implemented. Over the same period, data showed that merchants’ sales increased 38%; profits increased 19%. Given the center’s new appearance and traffic flow, more retailers opened stores there, cutting the center’s vacancy rate 32 percent and in turn increasing sales.”

“A lighting system change made to save energy and improve aesthetics at the Thalhimer Brothers Cloverleaf Mall branch store in Richmond, Virginia contributed to an annual sales increase of $1 million. When the profit portion of the sales increase is considered along with the energy savings of some $20,000 per year, the payback period for replacing a six-year-old system and installing 800 new luminaires and lamps was less than 12 months.”

“People cannot look at lighting as an expense, but rather as a way to increase sales and profitability. You can have the most beautiful store and the best jewelry, but in the end you want to be able to present your jewelry in the best possible light.”

“Buying: Of the 4.6 % sample of all shoppers who stopped to browse at the end-cap display, more than 2x as many purchased when the display shelves were illuminated (33.3%) as did when they were not illuminated (14.3%). A relative increase of nearly 133%.”